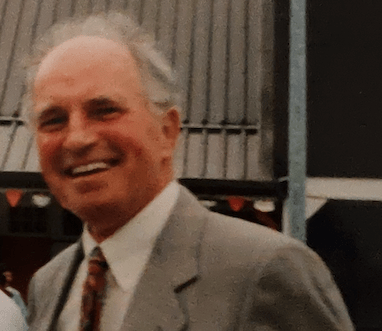 It is with deep regret that we announce the death aged 83 of Declan Healy, a Trustee of Sunday’s Well Boating & Tennis Club. Declan and his wife Margaret joined the Club in the 1980s.

From the beginning, he involved himself in the various sporting and other activities of the Club. He was well known for his quick wit and infectious laughter and his kind and compassionate spirit. Those who played tennis and cricket with him appreciated his friendly and competitive attitude. All who met him enjoyed his company and as a result, he was elected Tennis Captain in 1985 and Chairman in 1986/87 and we all deeply appreciated his commitment to his duties. He was appointed Trustee in 2011, a position he held until failing health forced him to resign in 2014. He was then appointed an Honorary Life Member in recognition of his overall outstanding contribution to the Club over many years.

Declan was always active and very enthusiastic during his many years in the Club. His unfailing good humour and happy demeanour endeared him to all. He endeared himself to each and every member.

Declan began his secondary schooling in P.B.C in 1950 and after graduation from U.C.C he found his vocation as a teacher and spent all his working life at Pres. where he was a dedicated teacher and respected by both his pupils and colleagues alike. He taught Irish and history and spent many summer vacations in the Kerry Gaeltacht fostering his deep love of Irish and he acted as a rugby commentator with Raidio na Gaeltachta for several years. He was appointed Deputy Principal from 1993 to 1998 and achieved the highest accolade by becoming Principal in 1999 the year before he retired.

He will be deeply missed by his wife Margaret, his 5 children Therese, Jacinta, Anne, Déaglán as well as 12 grandchildren and 1 great grandchild, also by his many friends and all who knew him.